We can help
Software Developer 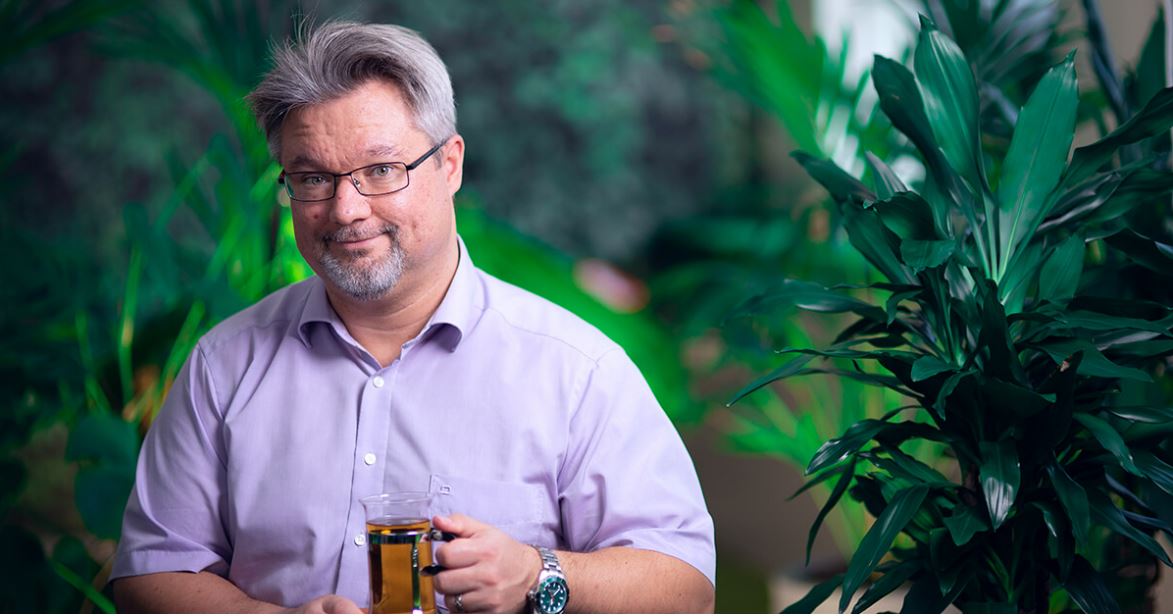 What software developer Mikko loves about Vincit is that people are allowed to focus whole-heartedly on expert work without being forced to take on supervisory duties or other administrative brouhaha.

Mikko Teräs professes to being a tea fanatic, and more often than not he’s in possession of a steaming mug of Darjeeling. “I usually sample all the first flush Darjeelings I can find”, he says, smiling. However, his love for code runs even deeper than his passion for a good cuppa.

“I’m a second-generation programmer. I had just started school when we got our first computer, a Commodore VIC-20. I started programming right away because there weren’t any games available at the time. I guess I never stopped.”

Mikko quickly noticed that he’d found something that he wanted to do when he grew up. From the very beginning, he was fascinated by the creative problem-solving needed and the feeling he got when he saw the software was taking form and transforming from bug central into a functional program.

Mikko started his work as a software developer at Vincit in the fall of 2017. Before this, he had already worked in software development in various different fields from telecommunications and stock markets to gaming and medical technology. His longest stretch was in measuring computer performance. “I had 20 years to get through all of that,” he laughs. Before coming to Vincit, Mikko spent a couple of years in a supervisory position, but he soon started feeling the pull of programming again.

Mikko first heard about Vincit from his wife who had visited the company during an excursion. After returning home, she exclaimed: “That’s where you should be!” Her enthusiasm piqued Mikko’s interest – what’s this Vincit where people approach new ideas with an open mind and challenge the traditional ways of running a company? After some googling, Mikko sent in his application, and the rest is history.

“It was a pretty straight-forward job switch, but it required a lot of thinking. I wanted to find a place where I wouldn’t be forced to take on supervisory duties and where I would get to see the world and try new things,” Mikko says.

There’s a world beyond C++

What drew Mikko to Vincit was the atmosphere of open-minded experimentation and curiosity. Not everything needs to be C++, even if that still happens to be his favorite programming language.

“I’m of the generation of coders who learned programming using Pascal. Pretty soon I jumped on the C and C++ bandwagon. These are the languages I’ve spent most of my years working with.”

For a long time, Mikko used to think that C++ was the thing, the language for all proper programming. Lately, C# has increasingly been finding its way into his projects – not only at work but also in the open source projects he works on in his free time.

“The good thing about C++ is that things have clearly been carefully thought through before they actually end up in the language. Even though C++ is slow to develop to the point of sometimes feeling like a relic, there’s a lot of reasoning behind it. You can do things with it that aren’t possible with many other languages. C# also has its benefits, such as its speed.”

Work with a purpose

Mikko has now been at Vincit for three years, and for nearly all of it he has worked on-site in one customer account, a medical company developing, for example, technology for treating cancer.

In addition to the meaningfulness of his work, Mikko has enjoyed its stability, and even working on-site with the customer hasn’t bothered him too much: “What’s there to complain about – I get two of all office parties and two sets of coworkers. If you’re into that sort of thing, it’s all good.” People have always been an important part of Mikko’s working life. Even if he doesn’t see his Vincit colleagues face to face on a daily basis, he can always reach them on Slack or by phone if he needs them.

“The bar is always set high at Vincit to hire the best, most competent people that are great to work with.”

Dreams of boldly going where no man has gone before

In the future, Mikko hopes to be able to continue doing something that can genuinely make people happy and help them in some way. The bottom line is no longer motivation enough.

“I’m a technology person at heart, so it would be amazing to get to do something truly groundbreaking. Something that’s completely new, that no one has done yet. Wouldn’t it be great to get to do that once in your life?” he says with a twinkle in his eye.

What this completely new and truly groundbreaking thing would be, he has no idea. Time will tell, but there’s one thing he is sure of: he’s in the right place.