We can help
Technology Data Sustainability

Digital services do make the world a better place by improving daily lives and creating new sustainable services, but many times the environmental impact of these solutions is overlooked. To further improve the benefits of digitalization we must be mindful of the environmental footprint that is created mainly by the infrastructure that keeps digital services up and running. Careful analysis provides the best action plan.

The hidden costs of digital services

While fulfilling the ultimate quest of making lives easier, digital technology can help reduce emissions in society – according to the Exponential Climate Action Roadmap, by up to 15% when it comes to carbon. This kind of remarkable development can be achieved with a wide variety of small cross-industrial actions, such as optimizing transport logistic routes, supporting the use of renewable energy and minimizing waste in retail and production.

Digital solutions are used to achieve all that – and then some – in a more efficient way. However, even this coin has two sides – digital technology also carries an environmental footprint of its own.

It is estimated that ICT solutions cause between 1,4 percent to 5 percent of global greenhouse gas emissions.To make matters more challenging, available information about the environmental impact of digitalization is limited, scattered and sometimes even contradictory. In addition, the end-users of digital services have quite limited understanding of the data and energy use of digital services.

The interest towards carbon footprint of digital solutions is growing. The more insight we get about the emissions of digital value chain and infrastructure, the better we can design technologies in a way that does not cause global emissions to grow at a faster pace.

To solve the problem, we must first recognize it

Digital services, such as applications, streamed services and data transfer require physical devices and electricity to operate.  Data centers, network infrastructure and wireless internet equipment all run on electricity and cause emissions. In addition, the manufacturing processes of user devices and infrastructure require natural resources and use scarce minerals.

Looking at the big picture, the energy consumption and carbon footprint of digital services can be decreased by improving the energy efficiency of data centers, information networks and end-user devices. Typically, at least the most successful digital solutions are used by a large audience, which means that even small decisions in the design phase can have substantial impacts. For example, a recent study by Bristol university estimated that even small tweaks in the design phase can significantly lighten the carbon footprint of YouTube.

Understanding the total energy economy of digital ecosystems, and how energy is consumed in different parts of it, helps make design decisions that minimize consumption along the digital value chain.

International Biathlon Union (IBU) recently launched a new digital ecosystem, including a new website and mobile application developed by Vincit to support the engagement and communication of the global biathlon community. As part of this project, IBU and Vincit measured the carbon footprints of both the IBU website and applications to understand what emissions are created and how much – as well as to identify ways to minimize them. 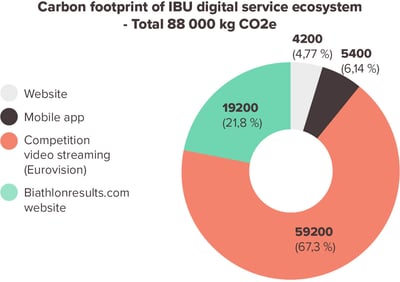 The carbon footprint of the digital ecosystem was calculated based on the electricity usage of the data transferred between the IBU web service and mobile application during the biathlon season. The amount of data was approximately 190 terabytes. In addition to data transfer, the calculation includes the emissions created by the production of the hardware needed for the servers and network infrastructure, as well as users' network devices. The calculation excluded the emissions of users’ devices, such as laptops or mobile phones, since the use of the IBU’s services on these devices is a small share of the overall use.

The data for the calculation was collected from the IBU / Vincit’s user data as well as from their service providers for the digital ecosystem. All service suppliers responded to the survey, but none of them was able to provide specific carbon footprint information or estimations on the energy consumption to serve as a basis of calculating their real impact to the IBU website and mobile apps. The final calculation was made based on publicly available data from research and sustainability reports, combined with the IBU’s insight on users. 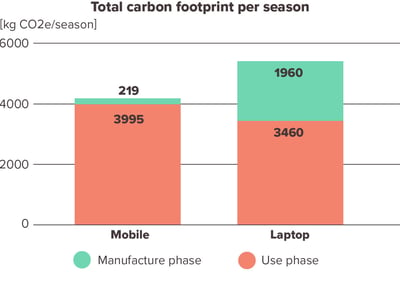 The manufacturing of the end-users’ home internet and wireless equipment plays a significant role in the carbon footprint of laptop users.

The location and country where IBU website and app are used determine the type of electricity the services run on. It was assumed that the energy used for data transmission is purchased from the market where the users are located. The emissions were calculated based on the country-specific emission factors for the 14 main markets of the IBU’s service. For the rest of the world, the average electricity production emission factor was used. Other emissions of data transfer were estimated based on public information on location of data centers.

Even when the total carbon footprint per user is relatively small – as in this case – there are ways to reduce the emissions of digital services.

End users can reduce their emissions by:

Developers of digital services can reduce emissions by:

Blog: The maintenance of a digital service begins during the design phase – take these three things into account

Blog: Total digitalization of sales – how to emerge as a winner?