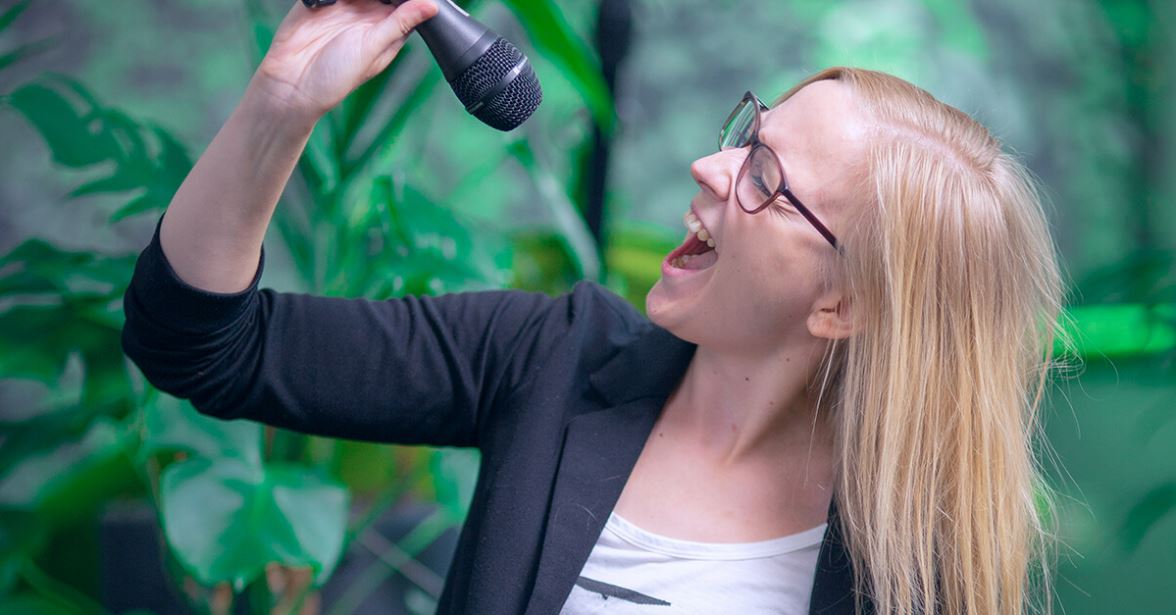 Minna Viitanen has a hybrid role at Vincit which allows her to combine her two passions: software development and UX design. Besides coding and user experience design, Minna is also passionate about music, which takes up most of her free time. She is part of Vincit’s own house band and even competed in the Voice of Finland.

Software development was Minna’s plan B

Music has always been a passion for Minna, and originally, she dreamt of a career in music. “In upper secondary school, I started to wonder whether a musical career was a safe enough bet – I needed to come up with a plan B,” she explains.

In addition to her musical prowess, Minna has always excelled in mathematics and physics – and knew her way around computers, too – and so plan B turned out to be applying to study at the Tampere University of Technology. Her father’s work as an electronics designer inspired Minna to learn about technical devices. In her childhood, their home was always filled with microcircuits, and she was fascinated to see how things were made.

Minna’s career in software development began about six years ago. She came to Vincit for a summer job and continued part-time after the summer alongside her studies. “At first, I worked in front-end development, and there was a natural transition into full stack development,” she says.

However, she soon found out that back-end was not her thing. Slowly, as she gained more experience, she began to get an idea of what her identity as a software developer was. “Working at Vincit has made me realize what I’m good at and what kinds of things I like to work on,” she adds.

Developer, designer, or both?

In coding, Minna has always been the most interested in creating user interfaces, because the results become visible quickly. She’s also interested in finding creative ways to solve problems. “I think the part where I’m mulling over issues is the most enjoyable for me. After I find the solution, I lose interest,” she laughs.

Minna’s native language is JavaScript. Lately, she has also ventured into the world of React and ClojureScript/Reagent. They have worked well with her way of thinking. She has mostly worked on web projects, but there’s also been the occasional mobile project in the mix.

At the moment, Minna works in a curiously hybrid role that’s part development and part design. She wants to tie these two together even more closely in the future to help the design and development teams collaborate more seamlessly. “Better and more flexible collaboration means we can create an even better user experience,” Minna explains.

The best thing about working at Vincit, Minna finds, is the diversity of opportunities. “We get a lot of support for finding something that’s meaningful for us personally. Everyone gets a say in what they want to do. Of course, that also means you have to have the guts to speak up and say what it is that you want.”

In addition to diversity, Minna values the freedom to set her own schedules and to work where she wants to. She particularly likes working in cafés where she can do some people-watching on her creative breaks.

What she finds challenging about her work is the overlapping of different roles – although this also makes the work more interesting. “I don’t have time to get bored,” she laughs.

Personal motivation and the will to learn make good coders

Minna believes anyone can be a good coder. Logical thinking helps, but the most important things are your own motivation and the will to improve. “For example, if you’re interested in interface development, there are some courses available at the Open University, and you can find all kinds of learning platforms online. YouTube is also full of information. And you always learn by just doing,” Minna says.

At Vincit, people are encouraged to develop their skills. “For example, we have a Competence Development bonus, which means you’re compensated for developing your skills in your free time. There are also plenty of coaching and mentoring services available if you need help in career planning,” Minna explains.

“I don’t think there’s any point to making strict definitions for what a coder should be. Diversity is a strength in any profession,” Minna says. Developers can do a lot more than just coding. The work always needs to take into account the customer’s perspective and combine the skills of a group of experts to understand what the project and product at hand truly needs. “You don’t need to be great at everything, but you should definitely be aware of your own strengths,” she adds.