We can help
Culture 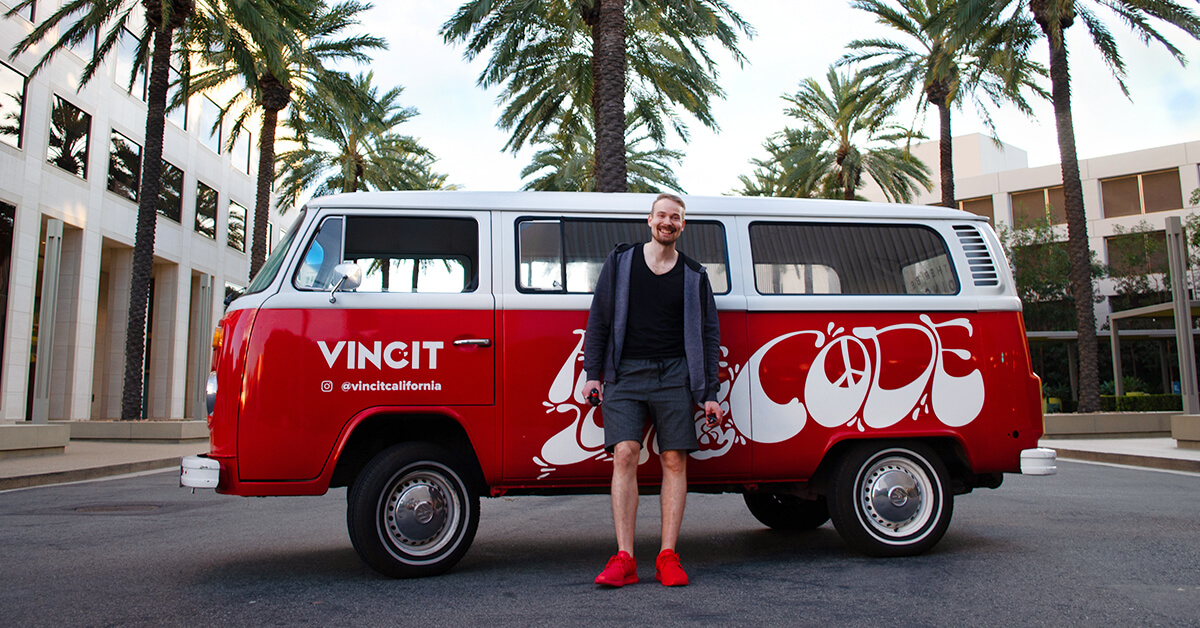 Over 250 days of sun a year, the chance to gain a new cultural experience, a nearly endless array of recreational activities, interesting job assignments, and a motivating salary policy made the decision easy.

Vincit opened its California branch in 2016. After a short spell in Silicon Valley, the office was moved to Irvine, which provided better opportunities for running the business, recruitment, moving around as well as accommodation. Vincit California currently employs enough people to build around two NHL teams. Given the ten or so Finnish reinforcements working in Irvine, the teams would no doubt be successful as well.

In the summer of 2020, with a couple of years of Vincit experience under my belt, I finally had the courage to ask Rachel, the local HR manager in California, about relocating to the U.S.

The first step in the process was to have a long discussion with Rachel and Ville, CEO at Vincit California. Ville and Rachel told me about the work and asked questions about my skills and competences. I learned that while in Finland a Vincit project can sometimes involve more than a dozen software developers, in California the projects are more limited due to smaller staff size. Ville and Rachel also enticed me with the many perks of California living, including days lounging by the pool and evenings spent biking or skiing in the mountain resorts. The work community seemed tightly knit and appeared to be enjoying everything California had to offer. I was surprised to hear that nearly all the Finnish workers at Vincit California had brought their family along with them.

After finishing the first discussion round, I had a chat with Mikko, Head of Development at the California office. He told me more about the different projects as well as the important role of posted workers, whose experience ensures that project management, sales support and mentoring software developers run smoothly on the other side of the pond. The posted workers are essential in promoting Vincit’s award-winning company culture in California, where the workplace practices differ from what we’re used to in Finland.

Getting the thumbs up and rolling up the sleeves

After the discussion, Ville contacted our Finnish office to discuss my situation in more detail. It didn’t take long for me to receive a particularly welcome message on Slack, telling me I had gotten the go-ahead from everyone and that Rachel would soon be contacting me about the visa and paperwork.

Being a child of the 90s, the jukebox in my head immediately started playing the O.C. theme song "California". I couldn’t wait to embark on my journey.

Soon after the message, I started applying for my visa with the help of some lawyers. The process was taxing and required me to dig up a number of necessary documents starting from my university degree certificate. Toward the end of November 2020, the stack of papers I had collected and filled out was finally sent off for processing at the U.S. Embassy in Finland.

This seemed like a good point to begin preparing for the move. I started looking for a suitable living area with the help of my Californian colleagues. I also found out that leasing a car was something I should do while still in Finland, since posted workers have practically no Credit Score and are therefore shunned by creditors. I had to reorganize some of my affairs in Finland as well. I noticed, for example, that some Finnish banks don’t accept customers who were liable to pay taxes in the U.S.

Some coaching, a visa interview, and off I go

All posted workers receive coaching which is designed to help them settle in the new country and work environment and offers support with things like finding an apartment or getting a car. The coaching sessions also allowed me to get more information on the operations of Vincit California as well as its future plans, the local work community and keeping in touch with Finland.

The final part of the visa process was an interview held at the U.S. Embassy in Helsinki. The official asked me questions about my job in Finland and California to make sure that I met the conditions of my visa. The Embassy has had their share of Vincit employees walk through their doors, so everything went smoothly. Stamping my visa as approved, the interviewer said: “Seems like Vincit has really made it in America.”

The coronavirus pandemic postponed my relocation by over a month. In late February 2021, after a number of farewell parties in Finland, I finally found myself at the Helsinki Airport, holding my brand-new visa and boarding a plane. If you want to read more about what happened next as well as about working and living in California, be sure to check out my future blog posts. I’ll be writing more about my life under the Californian sun as soon as I get settled.

Interested in making a career at Vincit and maybe even visiting California at some point? Check our vacancies.

Blog: Living the good life – working as a digitalization professional at Vincit California

Blog: Vincit California 2019 in a Nutshell

Blog: Back at work at Vincit – why was leaving and coming back worth it?