PubNub is an easy to use, well documented and well-supported platform for enabling real-time capabilities for web, mobile, IoT and backend applications through their selection of over 70 SDKs. In addition to its Pub/Sub messaging, PubNub lets the user add additional functionality, such as filtering or modifying messages via serverless Functions, manage read/write access via the Access Manager and recognize device & user state via Presence.
PubNub’s global data stream network handles over 2 trillion messages each month, providing near-instant message delivery around the globe. PubNub’s network is scalable and reliable (99.999% SLA) and lets the developers focus on developing their applications instead of worrying about managing the infrastructure. That is probably why it is already used by a lot of big-name companies around the world, such as Adobe, Logitech, and Yelp.
In this blog post, I'll show how to create a simple real-time chat application with PubNub and React. Let's get started.

Getting started with PubNub

To get started, head over to pubnub.com and create a new account by clicking "Login" on the top right and then selecting "Sign up". A free PubNub account includes a million transactions and access to all of the major features, so you'll have plenty to work with. Once you have created an account and log in, you’ll be redirected to the admin dashboard where you can create a new app for the purposes of this tutorial.
In the Apps section, select "Create a new app" from the right, enter a name and click "Create". This will create a new application that includes a default keyset with a publish and subscribe key that we need later on in our React app for real-time messaging. The keyset also includes a secret key that can be used for management-related functionalities.
An application in PubNub is just a way of organizing your different keysets (a single application might have multiple keysets for different purposes). These keysets are the beef of your real-time applications as all the different features are tied to the subscribe and publish keys. If you head over to the newly created default keyset page, you’ll find a lot of different configuration options that you can adjust in the “Application add-ons” section. By default most of the features are disabled and we don’t need to touch them in this tutorial. 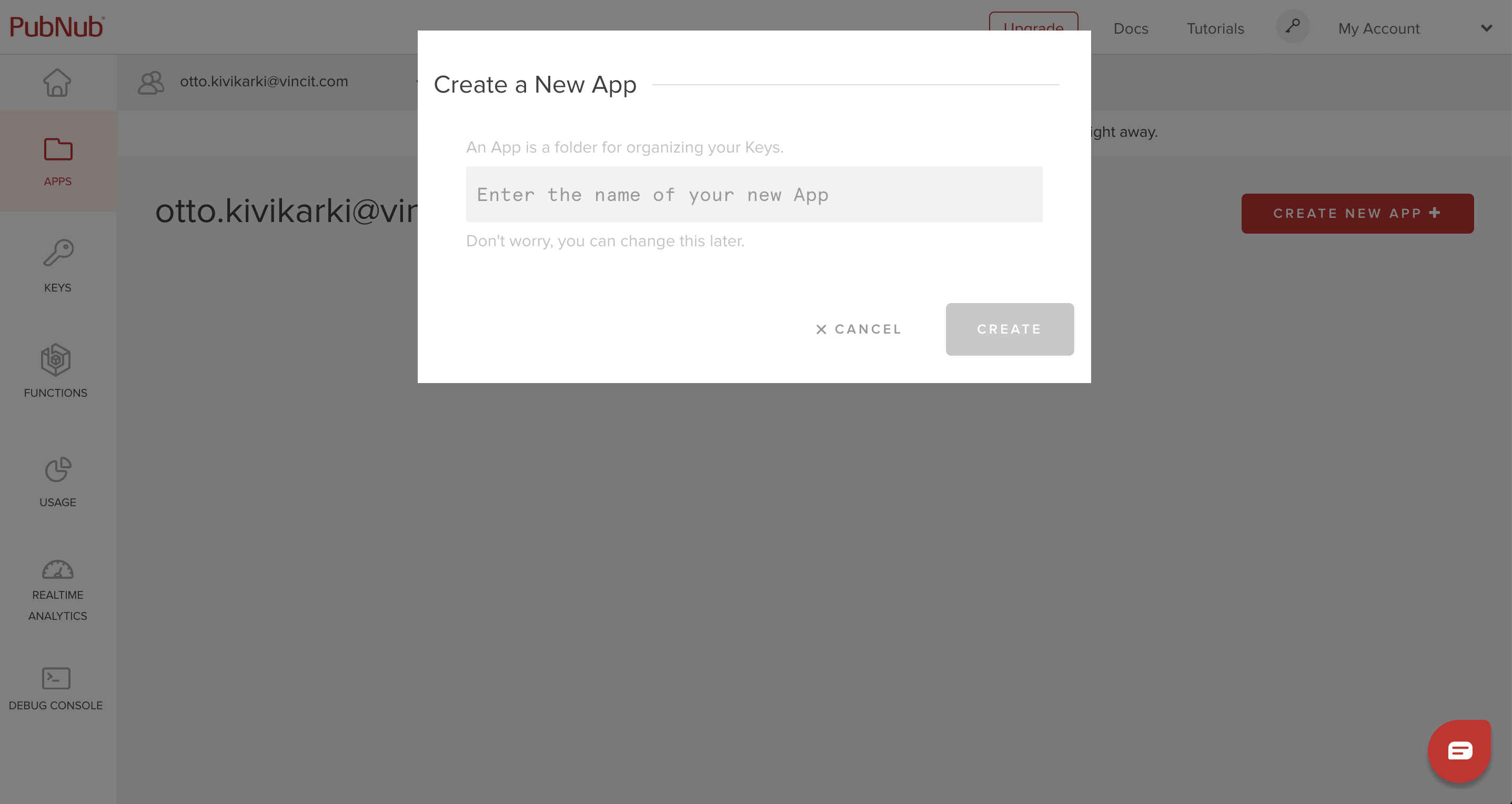 Creating a new app in the PubNub admin panel

First, create a new React project by running npx create-react-app pubnub-tutorial on your CLI. This will initialize a new React project and install all the required base dependencies. Move into the created directory and install pubnub by running yarn add pubnub. Note that there also is an npm package called pubnub-react, but I won’t be using it in this tutorial as it’s API feels a bit off for various reasons (more about it here) and the base Javascript SDK of PubNub is better suited towards learning and the tutorial anyway.
In this tutorial, I’m going to use React Context for managing PubNub. If you aren’t familiar with the Context API yet, you can read more about it here. Here the context is a good way of encapsulating the PubNub related functionality including initialization of the PubNub instance and storing the related data as the context variables and functions that can be passed down to its child components for easy re-use. There is a lot going on in the code below, so let’s go through it together.


1. In the `componentWillMount` method I am initializing a new PubNub instance. Your keysets publish and subscribe keys go here. Following best practices, I am storing the values as environment variables and reading them from the `.env` file. More about it [here](https://facebook.github.io/create-react-app/docs/adding-custom-environment-variables).
Now that we have the context set up. Let's add it to the root component in src/index.js and wrap our App component with it.

If you now start the application up by running yarn start, you should be able to see the following in the console confirming that we are connected to PubNub, sending a message and receiving it in the demo-chat channel. We can also confirm that all the subscribers are receiving the same message by opening up the application into another tab and refreshing the page. Each tab should log out Message received in channel: demo-chat {text: "Hello world!"} after refreshing the tab.

Connected to PubNub, sending and receiving a message

To finish up the tutorial, let’s remove the create-react-app example code from src/App.js and src/App.css and replace it with the following. In the code below I am adding a simple list for displaying the chat messages and a form for publishing a new message to the PubNub channel. I am also adding some styles to make the chat look at least somewhat nice. Nothing too fancy here, maybe except the cool new useContext hook for functional components that I'm using to grab the messages array and the sendMessage method from the context class we defined earlier. 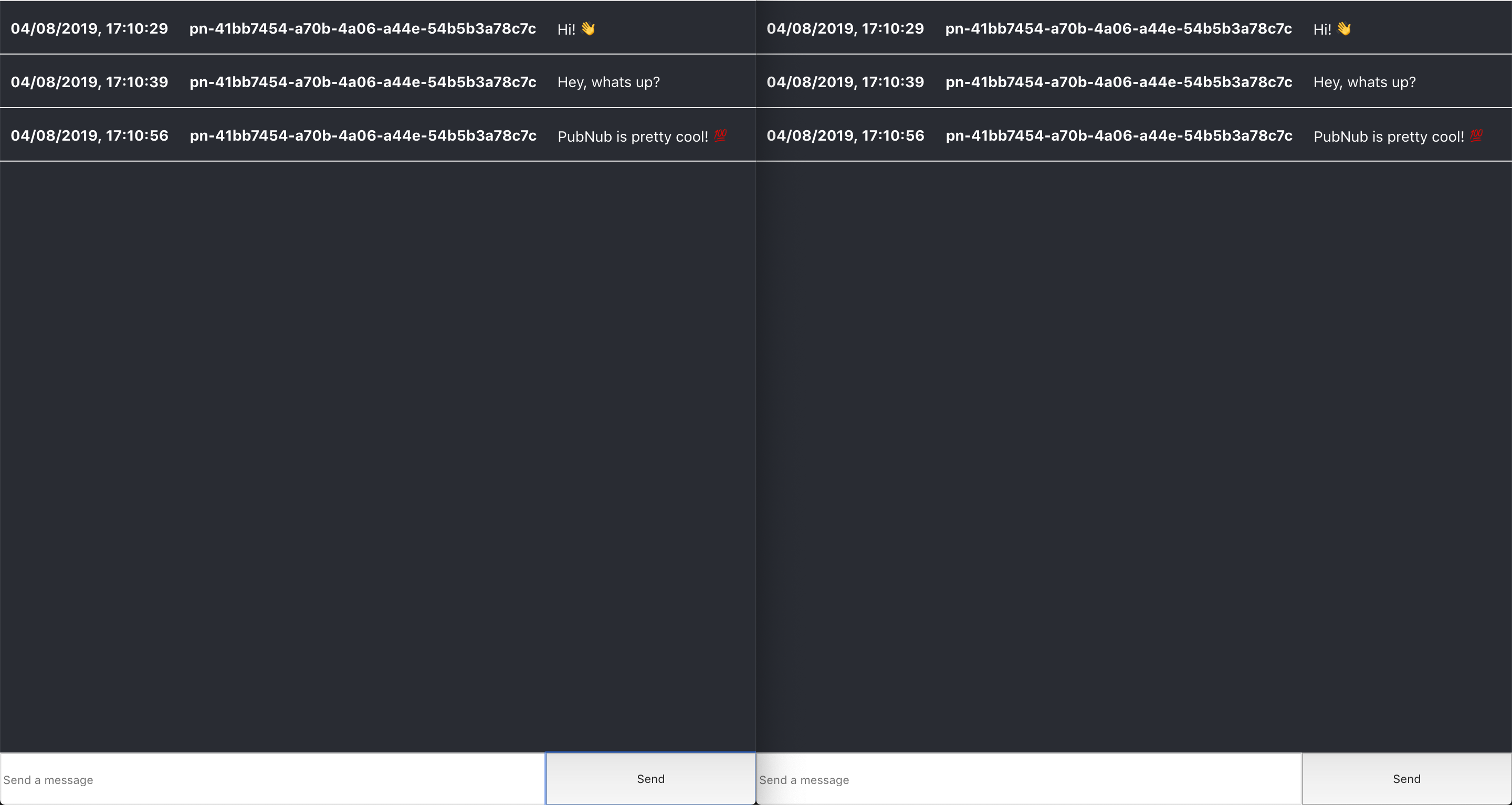 Demonstrating real-time messaging between two tabs
If you now open up two or more browser tabs side by side, you should be able to publish messages to the subscribed PubNub channel and see the initially published "Hello World!" message appear in all tabs among other messages you send!

Overall, I think it's pretty straightforward to get a simple real-time messaging application working with PubNub. Initialize an instance, subscribe to a channel and publish messages. Of course, there is a lot more to the PubNub platform such as access control and functions for manipulating messages like I already mentioned before, you can read more about those on the PubNub website.
The example code is available in my Github repository located at https://github.com/ottoo/pubnub-react-chat.
You can also view a live example of the completed tutorial at https://pubnub-demo-chat.netlify.com.
Otto Kivikärki
Lead Developer at Vincit California
Next up
Technology
How to tell if your Application Needs an Overhaul or Small Upgrade
The question has been around as long as software development has been around–should I completely rebuild my app or can I get by with incremental updates? The answer? You're going to love this. It depends on many factors. Don’t worry, I won’t leave you there. Today I’ll go through the different factors that will ultimately help you make the best decision.
Brian Walsh
2020-03-09
Technology
Fix Custom Font Inconsistency in React Native
Custom fonts are great, until you notice they're just a bit off on your iOS and android builds... Here's a way to make them more consistent in your react-native projects
Ryan Padilla
2020-05-08
Technology
Overview of Mobile Development Frameworks in 2019 | Native, React Native, Flutter and Others
This is part of a series of blog posts written over the last six years. The blog posts are about mobile development technologies. They don't go really deep into the technical details, but rather provide an overview of the techs: when you should use them and when not to.
Juha Riippi
2019-03-06
Technology
The New Features in React DevTools 4
An overview of the changes added to React DevTools 4.
William Strong
2019-08-28