The Story of the Bus... and My Encounter with the Irvine Police

Ville Houttu
February 6th 2019
When you visit our Irvine office, it will be the first thing you see: The wall-sized picture of the Vincit VW Bus in front of Huntington Beach Pier. Many visitors are surprised when told that the picture is not photoshopped. It is an actual bus I purchased two and half years ago.
Since then it has been towed away a few times, reported stolen, pushed on a freeway, visited repair shop numerous times… but also brought smiles to hundreds of faces.
Here’s the story in short.

I moved to Irvine in September 2016. At the time Vincit California had one employee, one client and had existed only for a couple of months. Like any founder, I had a lot of excitement for starting the new company. Meanwhile, I was still waiting for my social security number and Californian driving license. I had no credit history or utility bills to give proof of residency.
When I walked into a car dealership and tried to buy a car I was asked to go somewhere else. They simply didn’t want to sell me anything without the above-mentioned documents. It was only later when I learned that buying and selling used cars is a well-known way for money laundering. Being a tall blond guy with an accent didn’t exactly help me to clear the suspicions.
But I needed a car, any car, until the dealers would take me seriously. So, I went to Craigslist and typed: “Crappy Car” and the red 1976 VW bus came up. I went to see it and bought it the next day.

Due to its peculiar looks, the bus seems to attract towing companies.
Around the time the bus was towed away for the first time, it had an interesting habit of unexpectedly jamming the rear wheels so that it was impossible to make them roll. The bus simply stopped and would not start again. One time this happened in our parking structure near the office. It was Friday, and naturally we went for a happy hour after work. After a couple of drinks, I thought best to leave the bus there and pick it up the next day. I knew it wouldn’t start anyway.
The next morning when I went to pick it up, it had disappeared. After calling a few local towing companies, I found out the bus was at To&Mo, Laguna Beach. If you have ever had your car towed away, you know the feeling of being defeated by the system. The bus must have sensed my feelings because when I picked it up and paid the $300 to get it out, it started and run like a dream.
Back then I used to drive the bus to work every day. One morning the bus suddenly died on the Freeway 5 exit for the Irvine Spectrum Center. Considering it was only a half-a-mile to the office, a couple of strong Vincitizens walked over and pushed the bus to the nearby parking structure. I still remember people taking pictures of the 2018 Entrepreneur of the Year driving his car using his colleagues as its engine.
This time the bus was dead. It didn’t make a sound. So, we had to tow it to our favorite car mechanic Brad at Canyon German Auto. By some lucky coincidence, they happen to be located right next door to To&Mo, Laguna Beach.

I have to make a remark: the bus has never been towed away without a reason. The third time is not an exception.
Many of you know that I ride my bicycle slightly more than an average engineer. Near the office there is a trail I like to start my mountain bike rides towards Laguna Beach and Crystal Cove. As usual, I parked the bus where I always park it – the spot where the trail starts. Then I rolled and rode for almost three hours on the hills. By the time I got back, the bus had disappeared.
I was so accustomed to it getting towed away that I didn’t even consider other options.
After leaning my bike next to a nearby tree I started my regular pattern of calling different towing companies. None of them had it. I slacked to the whole company that the bus had been stolen (which, surprisingly was a relief to many of them).
Then I called the Irvine Police.
Any public or private service should learn how Irvine Police treat their customers. When I called, I was immediately connected to an officer who listened to my description of what had happened. He made some remarks making sure the vehicle actually has “Peace, Love & Code” and “Magic Code Bus” hippie-style labels on its sides. “And, you said there are a lot of black rubber ducks on the windshield?” asked the Officer. I confirmed.
He listened carefully and told me that he will drive there to take a look at the location and that he would call me in 15 minutes. After 10 minutes my phone rang. He said: “Hello sir, I have your bus, and it’s exactly where you parked it.” Then he continued, “After hearing how you described the bus, I knew no one in the world would steal a car like that.” He laughed, “Besides, it’s manual shifting - only Europeans know how to drive a stick.”
While I may have mis-parked the bus, I use the Irvine Masterplan as a (poor) excuse. All the streets and houses are perfect… and perfectly identical.

We still have the bus. Well... in fact, Brad at Canyon German Auto has it until its brake cylinder and the keylock is replaced.
The bus is an irreplaceable part of our story, and we love it no matter how many times we have to pick it up from the local towing company. If you see us on the road, it’s probably one of the Europeans driving. Wave your hand – we promise to greet you back!
Peace, Love & Code. 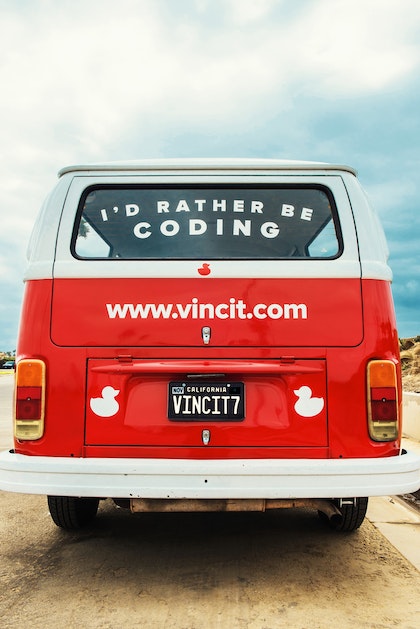 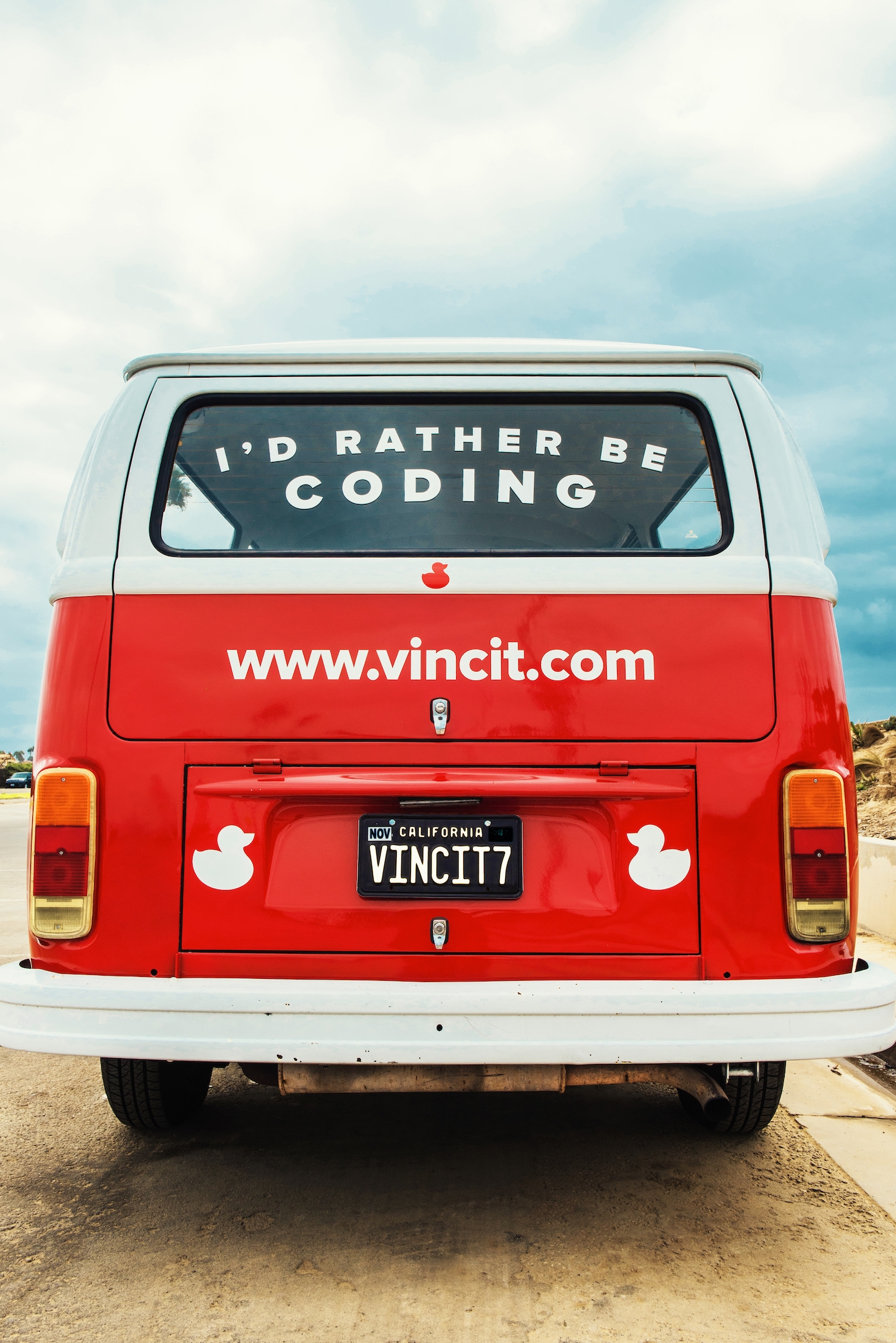 Ville Houttu
CEO, Vincit USA
Next up
Culture
Prepare not Panic: Managing Anxiety During a Difficult Time
In a time of so much uncertainty, you may begin to experience feelings of confusion, stress, and anxiety. Avoiding these emotions can be difficult when all you see are mass closures, empty shelves at the grocery store, and social distancing. Some of us may feel powerless and hopeless adjusting to this “new norm” but with the proper coping mechanisms you won’t need to worry.
Paula Tena
2020-03-25
Technology
Introduction to Kubernetes: Part 2
Curious about how Kubernetes works? Here's the second part of a blog post that will help catch you up to speed.
Ryan Padilla
2019-12-20
Technology
Introduction to Kubernetes: Part 1
Container orchestration, controller managers, worker nodes with kubelets, what does it all mean? If you're confused or just curious about Kubernetes, you've come to the right place.
Ryan Padilla
2019-12-10
Culture
How to Start Remote Work at Your Company
With the growing number of companies considering the switch to remote work, here are some useful tips and suggestions from our experience at Vincit to help those looking to transition into telecommuting operations.
Paula Tena
2020-03-17